American Airlines to the Max! Great Views On a 737 MAX 8 From Miami to LaGuardia

Poor Mr. MAX, famous for all the wrong reasons. But the dumpster fire otherwise known as 2020 gave the 737 MAX a chance to hide from the news cycle as Boeing fixed its design issues. The FAA held Boeing’s feet to the fire with the recertification, and today I have more than enough trust in the plane to fly it. I got my chance on a medium-haul flight from Miami International to New York LaGuardia earlier this summer. 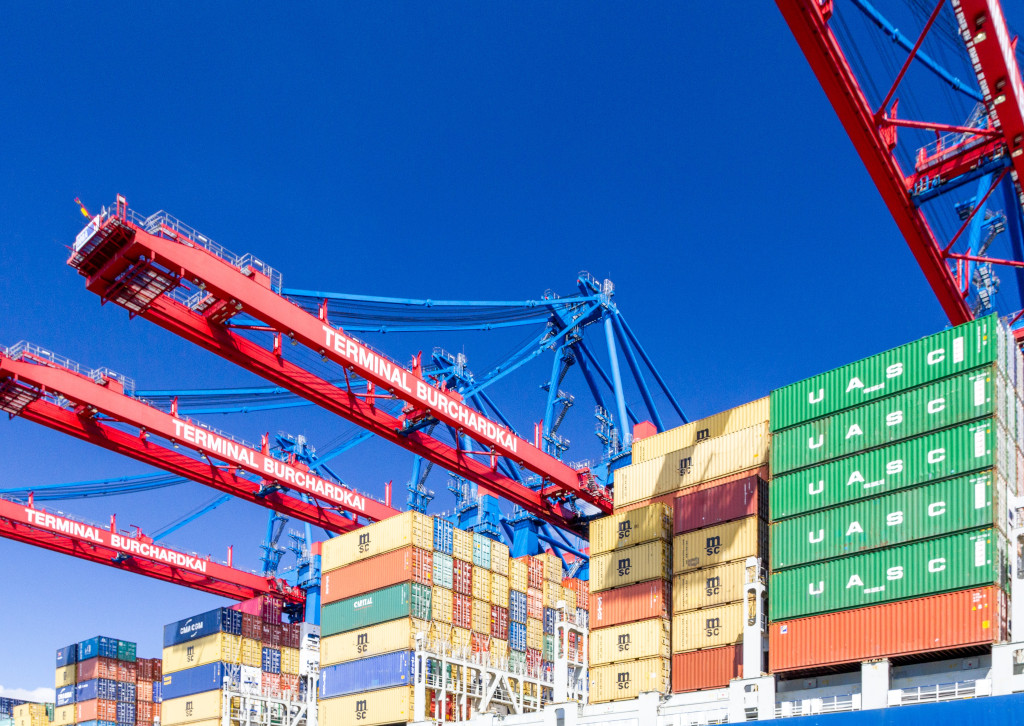 After all the build-up I was expecting to be either overwhelmed or underwhelmed. But instead, I was just … whelmed. It’s a gorgeous plane, sleeker than the 737’s previous iterations. It’s quieter, has cooler onboard lighting, and plenty of under-the-hood operational benefits for the airlines. I felt very safe on the plane, and about as comfortable as one can expect to be in domestic economy. But as usual, the airline’s choice of onboard product made the biggest impact on the experience. Ultimately, the most memorable parts of the flight were the *amazing* window seat views I got over Miami and New York.

Hop onboard with me for a few thoughts on American’s 737 MAX 8, and for lots of photos and videos from the flight. 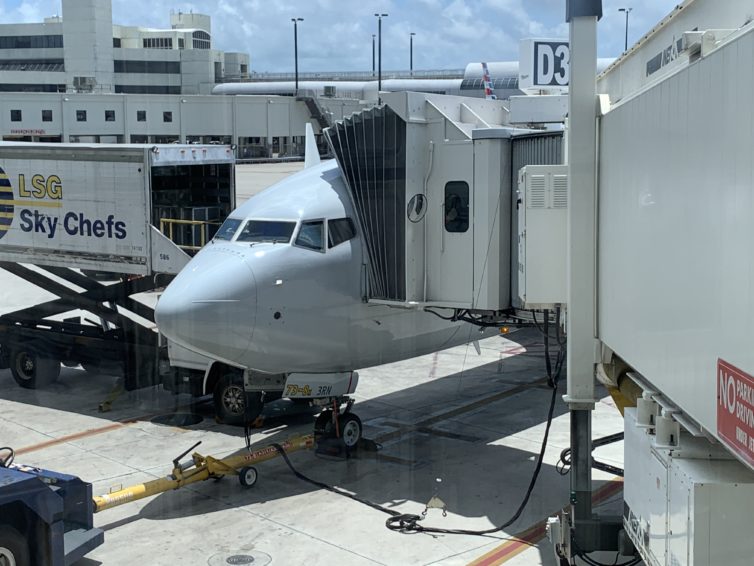 The subtle exterior changes Boeing made with the MAX make for a great-looking plane. Many of them, like the sleek tail cone and the chevrons on the engine nacelles (or for non-AvGeeks, the wavy thing on the butt-end of the engine) are borrowed in part from the 787 Dreamliner. 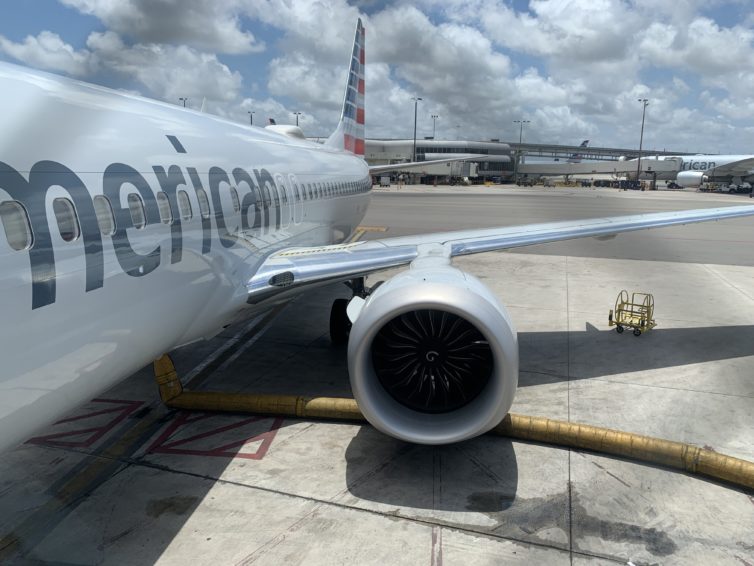 The forward placement of the engine relative to the wing was at the root of the MAX’s design issues. But aesthetically I think it looks cool.

Speaking of things that look cool (to AvGeeks at least), I got a peek into the flight deck during boarding and was amazed by the huge displays. It’s a high-tech look for the 737 line, and a far cry from the cockpits in the first 737s that flew over 50 years ago. 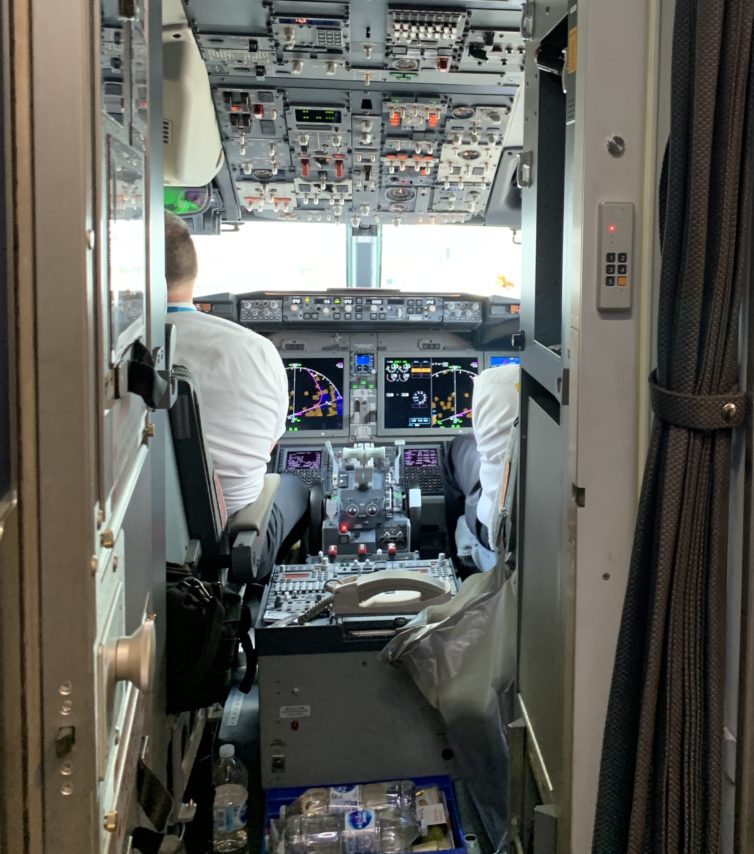 I was a little less enthusiastic about American’s onboard product. But then again, domestic economy seating is rarely worth any excitement. Keeping with the general airline trend of newer planes getting worse seats, American delivers barely 30 inches of pitch (legroom plus seat thickness) in standard economy. Because the pitch also includes seat width and the seats are THIN, your functional legroom is about the same as on old planes with thick seats with 31-32 inches of pitch. But, it won’t surprise anyone that the thin seats come with very little padding. 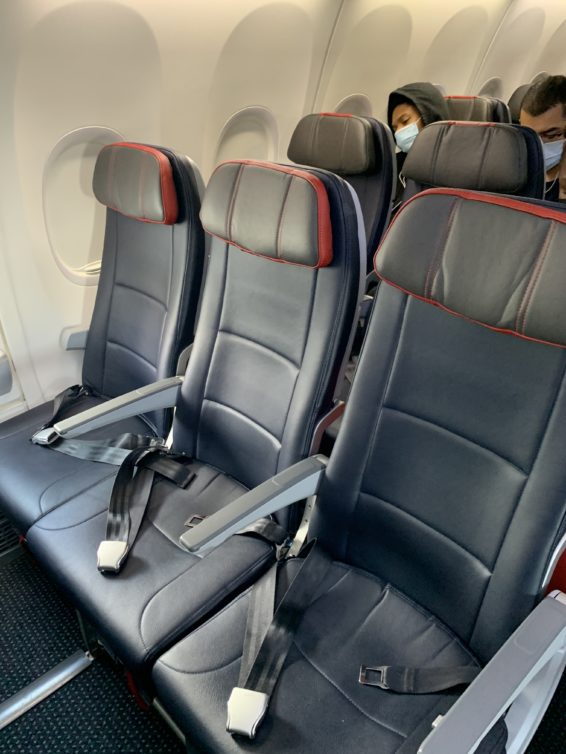 The most noteworthy change is that there are no inflight entertainment screens, so you have to stream to your B.Y.O. screen. The literature pocket and USB charging port are up high, which gives you a bit more space for your knees, but clutters things up at eye level. 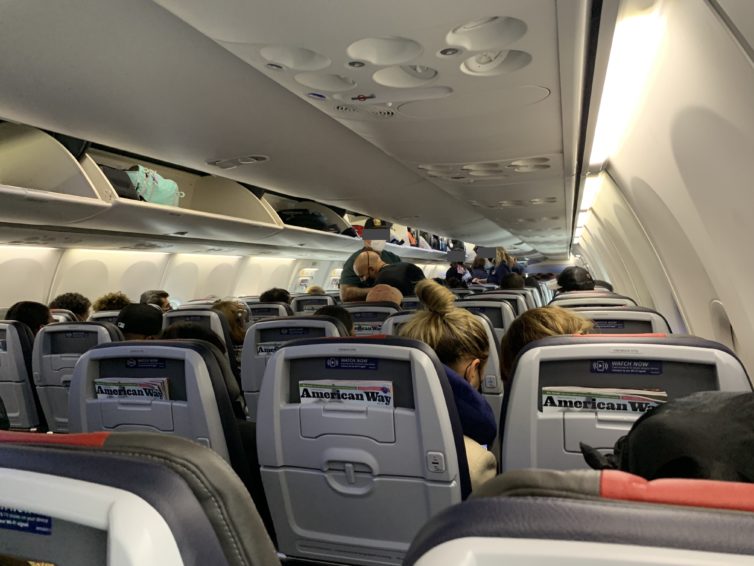 Even with the nice cabin lighting and other finishes, it all made for a cramped and uninspiring cabin product. 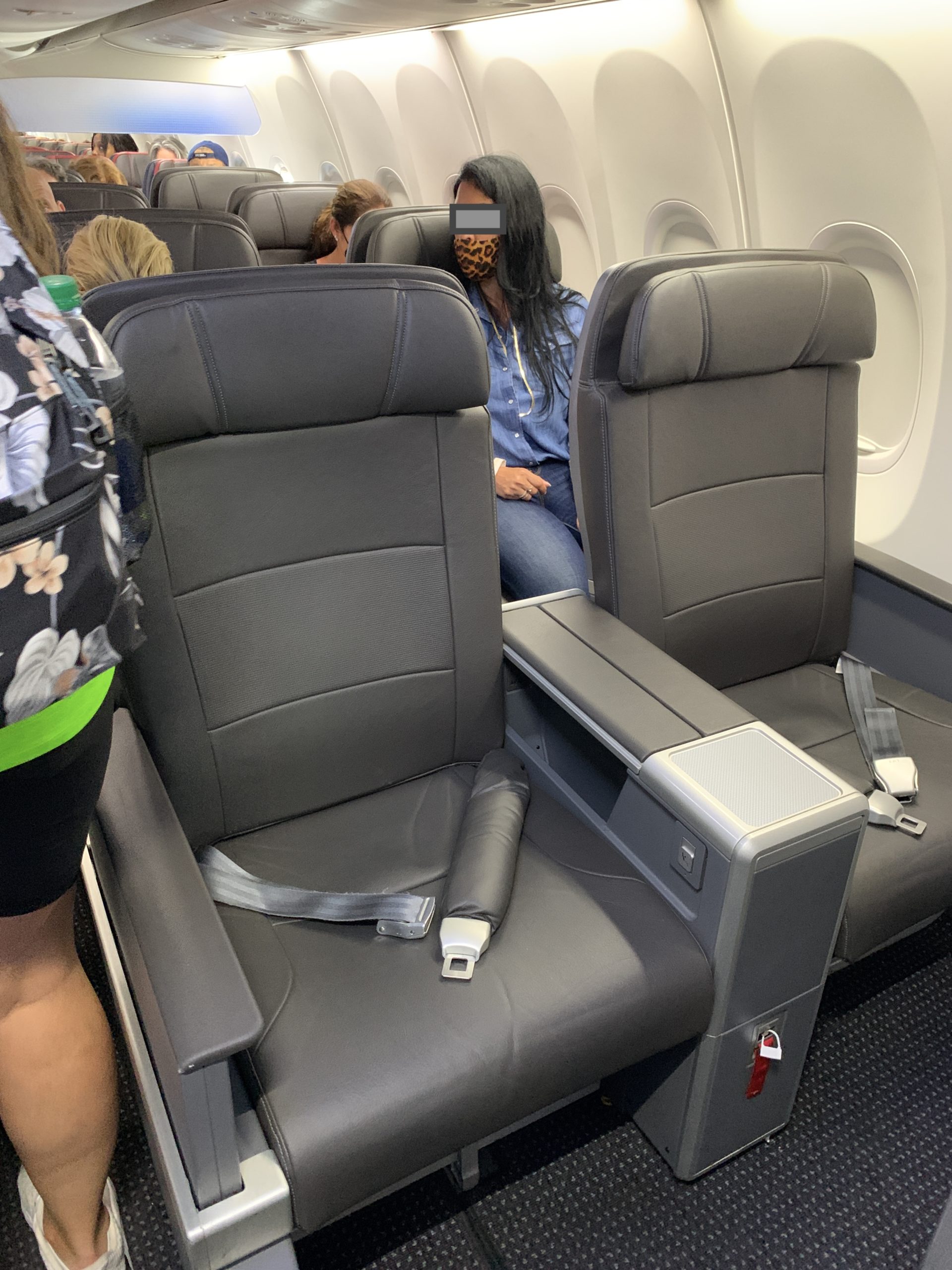 First class looked like the standard for domestic aircraft. It’s wild that even here in a premium cabin there weren’t any seat-back screens.

It was hard to find any evidence on the printed materials that I was on a MAX. Even the safety instructions, which are often specific about the variant of aircraft, just said “737.” As much as I’m confident in the MAX personally, I do think passengers should be aware of what specific plane they’re on. Then again, by the time you’ve boarded it’s a little too late. 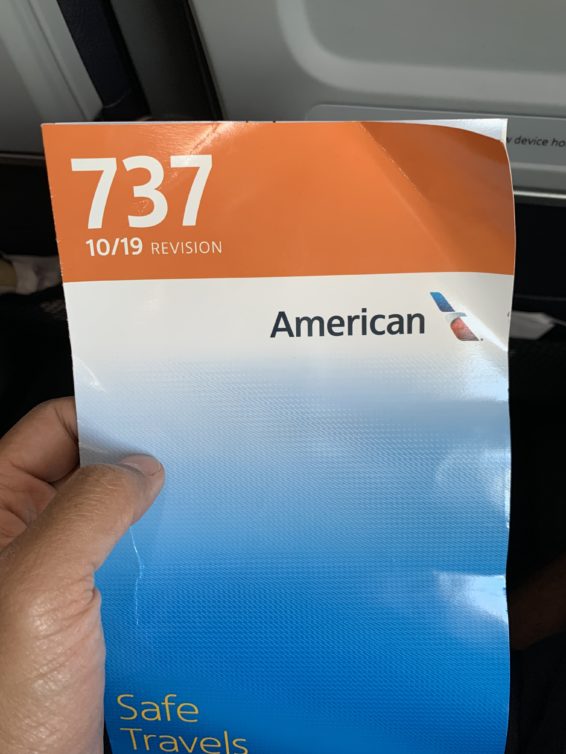 We passed by an older 737 in one of American’s retro liveries. I’d never seen this one before, and a bit of googling after the flight showed me it’s a Reno Air livery. Looking back through the archives, we mentioned this livery briefly in one of our recaps back in 2015. 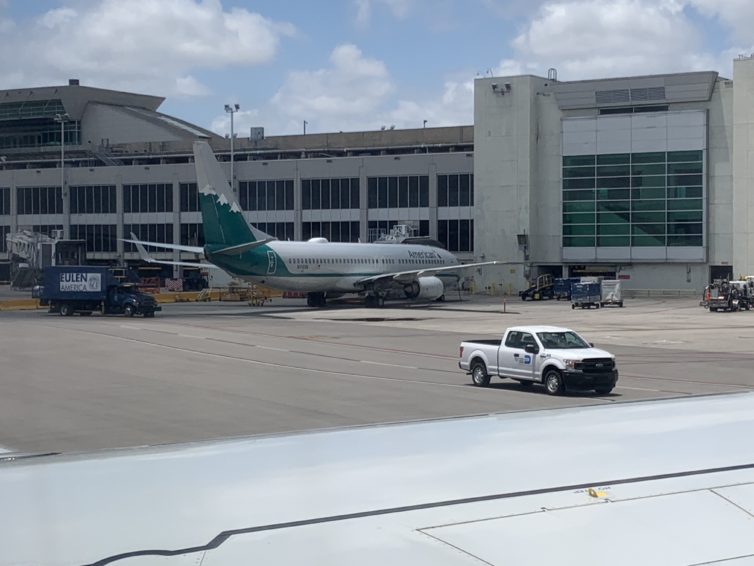 We were treated to crystal-clear sunny views during our taxi, takeoff, and climbout from Miami. During the taxi an Atlas Air 747 took off beside us, and by the fact it only used a mile of runway I figure it was pretty lightly loaded. Getting to see Fort Lauderdale Airport during cruise climb was an added AvGeek bonus.

The flight itself was perfectly uneventful, with reduced service onboard as a result of COVID (this flight was back in May and service policies on the airlines are changing rapidly as things slowly move towards normal). I did notice that the lavatories are insanely small — so tiny that I couldn’t even get a useful picture. The sink in particular was frustratingly small, forcing you to choose whether to wash only your fingertips or else splash water everywhere.

Back to the views! They were amazing on our descent over Brooklyn and Queens. We barely had to change course at all for our straight-line approach into runway 04 at LaGuardia, which ended with a VERY low pass over Grand Central Parkway just before touchdown.

My take on the MAX

I honestly have less to say here than I thought I would. I felt very safe on the MAX thanks to Boeing’s hard work getting the plane airworthy again. The minor updates from the previous-generation 737 are nice, and as an AvGeek I like the way the plane looks. Better fuel efficiency is a huge plus, though not a factor that impacted my experience as a passenger. 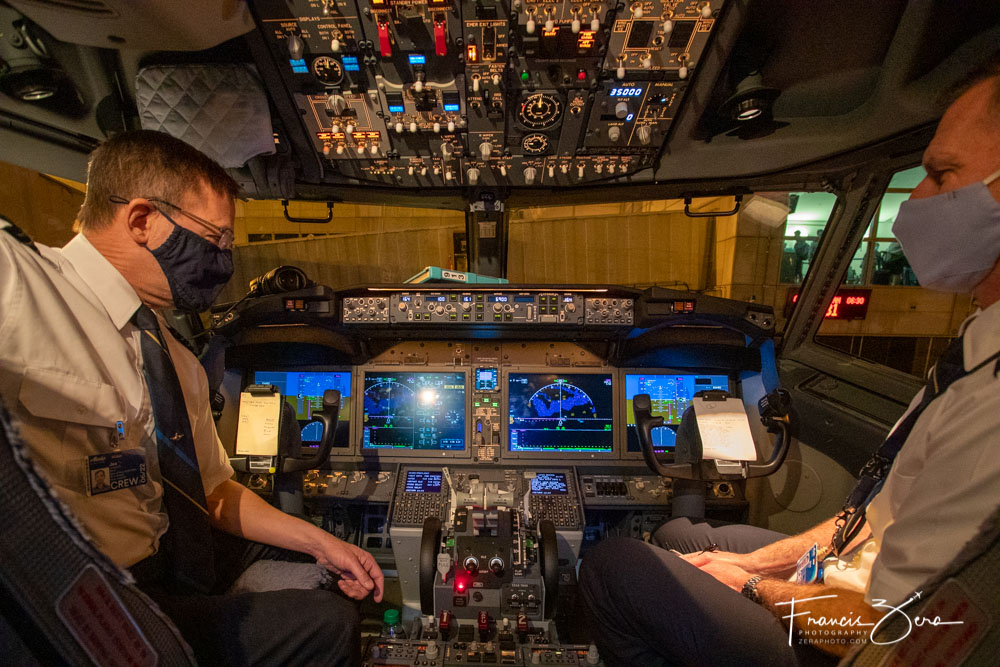 The crew and flight deck on an Alaska Airlines 737 MAX we flew a few months ago – Photo: Francis Zera

Ultimately the product the airline puts onboard makes the biggest difference. And in this case American didn’t do anything inspiring with the MAX. In some ways it felt like they did the bare minimum. I might think twice about picking the AA MAX for a five+ hour flight, but otherwise I’d be happy to fly it if the price was right. And with views like the ones I got on this flight, who needs seatback screens anyways?

Now it’s time for us to hear from you. Do you have experience flying the MAX since its relaunch? If not, do you want to give it a try? Share your thoughts in the comments section below.

The post American Airlines to the Max! Great Views On a 737 MAX 8 From Miami to LaGuardia appeared first on AirlineReporter.